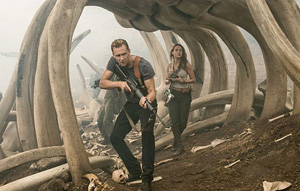 Kong: Skull Island is a fantasy adventure in which a team of scientists and soldiers explore an uncharted island in the South Pacific.

A robust ripping yarn, this latest take on the story of King Kong borrows heavily from the monster movies that came before. And that’s as it should be – part of the fun of a film like this is spotting the plot points that have been ripped from other pictures, even if those pictures include schlock like Mega Shark Vs Giant Octopus.

Like, well, pretty much every monster movie from the original King Kong, via Godzilla, onwards, the real antagonist here is not the one with feet the size of a Volvo estate that crush members of the supporting cast. It is man’s territorial nature and the hubris to believe that violence is the answer (John Goodman and Samuel L Jackson, respectively, are the representatives of the failings of humankind).

The first thing the team of adventurers do when they reach the hitherto undiscovered Skull Island is carpet-bomb it. Even if it’s necessary as a plot point, this does feel a little far-fetched. Still, the explosive charges trigger a thrilling first encounter between Kong and a fleet of helicopters. But the wrath of Kong is not the only thing awakened. Giant subterranean killer reptiles also join the party.

It’s an unexpected follow-up to the gorgeous The Kings of Summer for director Jordan Vogt-Roberts, but it’s enjoyable enough, if a little overblown. However, despite the quality of actors – Tom Hiddleston and Brie Larson star, alongside John C Reilly – the characters are not quite as nuanced as you might hope. The usually excellent Larson, in particular, doesn’t feel entirely at home in this effects-driven romp.