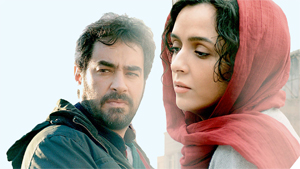 Winner of the Oscar for Best Foreign Language Film, its London premiere in February was a free screening hosted by Mayor Sadiq Khan in Trafalgar Square. This was the second Oscar for director Asghar Farhardi, who won in 2012 with A Separation.

The film deals with the fall-out from the assault of a teacher’s wife in their new home, while the couple are performing in a production of Arthur Miller’s play “Death of a Salesman”.