Duration: 85mins
AGE Rating: Cert U
Free admission but a collection will be made before and after the film for the Roof Fund 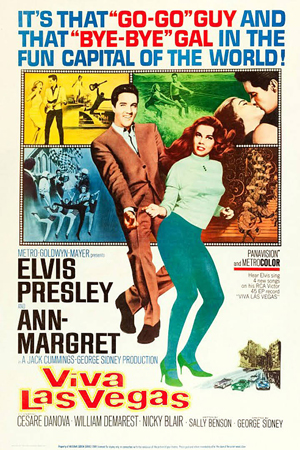 Viva Las Vegas, one of Elvis Presley’s most popular vehicles, adheres as rigidly to formula as a Kabuki dance. Elvis plays a race-car driver competing in the Las Vegas Grand Prix opposite his principal rival, Cesare Danova. To finance his entry, Elvis takes a job as a casino waiter. Naturally, he is occasionally prevailed upon to sing, making one wonder why he didn’t choose this talent as a means of making some quick cash. As always, Elvis chases all the wrong girls, only to ignore the “right” one, portrayed by Ann-Margret in her considerable youthful prime (We’re supposed to believe that A-M is the daughter of irascible William Demarest. So much for the reliability of gene pools). With a pre-fat Presley, an indescribably gorgeous Ann-Margret, and no fewer than 12 songs on the soundtrack, how could Viva Las Vegas help but reap a fortune at the box office? ~ Hal Erickson, Rovi