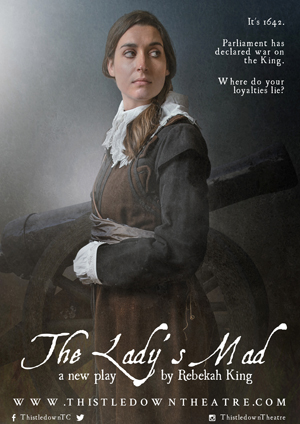 Performances are in the Club Room – upstairs venue, not suitable for people with mobility problems. Seating is unreserved.

1644. England is at war with itself. Hester Cavill and her husband have sided with opposing armies: she a royalist, he a parliamentarian. When Sir Arthur is away, Hester refuses aid to a regiment of Cromwell’s troops who have turned up at her estate expecting Sir Arthur’s support. What Hester has not predicted, is that these troops have a strong-willed female leader of their own. Charismatic young prophetess ‘Mad Moll’ has found herself in an unexpected position of power. She calls herself the ‘English Joan’ and directs the troops with her supposedly God-given visions. Spurned by Hester, she aims her cannons and her fury at the Cavill estate. As the various members of the Cavill household struggle to decide where their allegiance lies, a war of wits and wills ensues between the two extraordinary women. Pride and lives are at stake for all involved and, as Moll and Hester exploit the various stereotypes of female power for personal gain, they will both risk the accusation that they were only madwomen after all.

An original story based on a collection of true anecdotes and written by up and coming playwright Rebekah King, ‘The Lady’s Mad’ illuminates one of England’s most turbulent periods through the lives of its extraordinary women. The piece touches on many relevant themes including family loyalty, the struggle of women and political unrest.