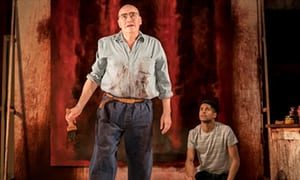 Following the run at the Wyndham’s Theatre which ended in July, Red will be broadcast in cinemas. Written by John Logan, directed by Michael Grandage CBE the play stars Alfred Molina as legendary artist Mark Rothko alongside Alfred Enoch as his assistant. It enjoyed hugely successful runs both in the West End and on Broadway, where it won 6 Tony awards, including Best Play.