A Murder is Announced 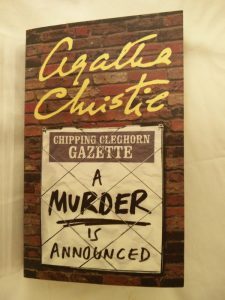 Sinodun Players are proud to present Agatha Christie’s A Murder is Announced, based on her 1950 book of the same name. This production celebrates 70 years of the Players and 40 years since the opening of the Corn Exchange, as Agatha Christie was President of Sinodun Players for 25 years from 1950 until 1975.

An announcement in the local paper states the time and place when a murder is to occur in Miss Blacklock’s house. The victim is not one of the regular occupants of the house but an unknown and unexpected visitor. Come and enjoy a classic Christie puzzle of mixed motives, concealed identities and a second death as a determined Inspector follows the twists and turns, with Miss Marple on hand to provide the final solution.

On the Wednesday evening of this production you can also book for a talk by local historian Judy Dewey, about Agatha Christie’s life and local connections. See here for details.