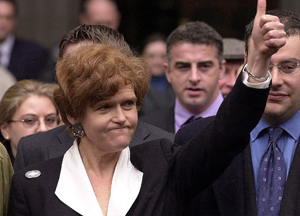 A courtroom drama about the libel case brought by Hitler apologist David Irving (Timothy Spall, effectively repellent) against historian Deborah Lipstadt after she described him as a “Holocaust denier”, Denial couldn’t be more timely. It’s a film that is tailor-made for an era in which politicians glibly spout “alternative facts” if the truth doesn’t suit them. It’s also rather disheartening, as it reveals just how labyrinthine and time-consuming the process of legally unpicking these falsehoods is.

Rachel Weisz brings a barrelling energy to her performance as the academic who finds herself in the unaccustomed and decidedly uncomfortable position of having to let her legal team fight her battle for her. Andrew Scott and Tom Wilkinson play solicitor Anthony Julius and barrister Richard Rampton respectively. It’s an unconventional dynamic for a courtroom drama – Lipstadt’s team refuses to call her as a witness so the principal character is mute throughout the key scenes. However, David Hare’s measured screenplay makes a virtue of this. Lipstadt’s caged intellect snaps at the hands of everyone who approaches, even those on her side.