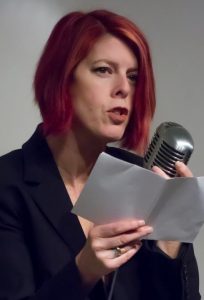 Jill Battson is a double JUNO Award nominee and an internationally published poet and poetry activist.She has been widely featured in literary jounals and anthologies in North America and the UK and has performed her work around the globe. Her first of four books, Hard Candy, was nominated for the Gerald Lampert Award. Jill has written several plays and solo works, including Ecce Homo – an enhanced monologue for dance and voice. She wrote the libretti for two short operas – Netsuke and Ashlike on the Cradle of the Wind – produced by Torono’s Tapestry New Opera. Her third book of poems, Dark Star Requiem, is the libretto for the oratorio Dark Star Requiem which opened the 2010 Luminato International Arts Festival.

Following the readings there will be Q and A with Adrian Books, Artistic Director of the Henge21 Festival in Dorchester.