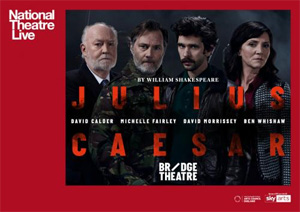 Caesar returns in triumph to Rome and the people pour out of their homes to celebrate. Alarmed by the autocrat’s popularity, the educated élite conspire to bring him down. After his assassination, civil war erupts on the streets of the capital.

Please note that Julius Caesar will contain strobe lighting and is now rated 15 due to several scenes of a violent and bloody nature, and gunshots. The performance will not have an interval.

Recorded and shown as live.