Return to the Forbidden Planet 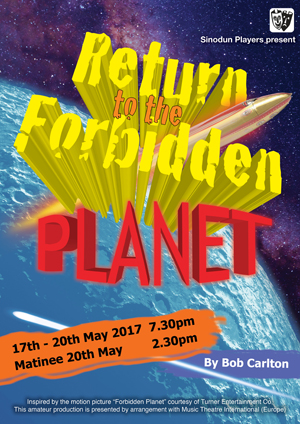 This adored and critically-acclaimed Olivier Award winning rock spectacular, loosely based on The Tempest, is a thrilling and energetic jukebox musical, packed with rock classics such as Great Balls of Fire, Good Vibrations, Shake, Rattle and Roll, Go Now and Young Girl.

Baby boomers – come and re-live the days of your youth! Thatcher’s children and new-kids-on-the-block Millennials – come and see what it was all about!

Captain Tempest’s spaceship is hit by a meteorite storm and crash lands on an unmarked planet, D’Illyria – the Forbidden Planet. It is inhabited by Prospero, a sinister scientist, his delightful daughter Miranda, a robot called Ariel, and an uncontrollable monster. The adventure begins…………

From the rock’n’roll robot and mad scientist, to a green-tentacled monster, this is Shakespeare as you’ve never seen it before. With a live rock band on stage, and a full cast of high-energy singers and dancers, fasten your seat belts and prepare for a high-octane space adventure!

The last live show before the closure of the Corn Exchange for renovations – it will quite literally Raise the Roof!

Bring everyone…..and get ready for BLAST OFF!