The programme starts with a short documentary The Candy Bomber, there will then be a short talk about our ideas for a film club and an opportunity for the audience to respond.

Then we will show Rashomon, a restored print of Akiria Kurosawa’s classic black & white 1950 film, in Japanese with sub-titles.

A short feature on Gail Halvorsen who, as a Berlin Airlift pilot, had the idea of dropping ‘candy bars’ to the besieged children of East Berlin; an idea that ‘snowballed’

During the early days of the Cold War a courageous young pilot Gail S. Halvorsen volunteered to fly food into the blocked city of Berlin. Upon meeting some of the children of the beleaguered city Lt. Halvorsen got the idea to drop candy to them as he landed his C-54 cargo plane at Templehof Airport. This action has endeared Gail Halvorsen, not only to the children of Berlin, but to all the people of Germany. 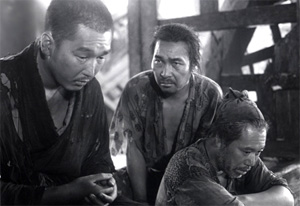 A priest, a woodcutter and another man are taking refuge from a rainstorm in the shell of a former gatehouse called Rashômon. The priest and the woodcutter are recounting the story of a murdered samurai whose body the woodcutter discovered three days earlier in a forest grove. Both were summoned to testify at the murder trial, the priest who ran into the samurai and his wife traveling through the forest just before the murder occurred. Three other people who testified at the trial are supposedly the only direct witnesses: a notorious bandit named Tajômaru, who allegedly murdered the samurai and raped his wife; the white veil cloaked wife of the samurai; and the samurai himself who testifies through the use of a medium. The three tell a similarly structured story – that Tajômaru kidnapped and bound the samurai so that he could rape the wife – but which ultimately contradict each other, the motivations and the actual killing being what differ.