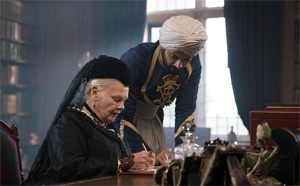 Victoria & Abdul is a 2017 British biographical comedy-drama film directed by Stephen Frears and written by Lee Hall. The film is based on the book of same name by Shrabani Basu, about the real-life relationship between Queen Victoria of the United Kingdom and her Indian Muslim servant, Abdul Karim.