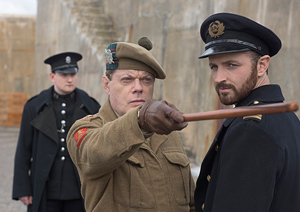 This is a remake of the classic Ealing Studios comedy based on a real life event.  The SS Politician, an 8000-ton cargo ship sailing for Kingston, Jamaica and New Orleans with a cargo including 28,000 cases of malt whisky ran aground off the Island of Eriskay in the Outer Hebrides on 5 February 1941, during gale force winds…

From the Edinburgh Film Festival.

The warmth, whimsy and, of course, the whisky which made Whisky Galore! such a success in both the source novel and Alexander Mackendrick’s 1949 film adaptation are alive and well in this version of a much loved and highly treasured favourite. The story of Whisky Galore! is based on real life events, when the 8000 ton cargo ship the SS Politician ran aground off the Island of Eriskay during gale force winds. Author Compton McKenzie took these events and wrote a wonderfully warm and witty book that was ripe for adaptation. In 1949 his story of whisky-deprived islanders plundering a wrecked vessel and doing their best to hide the loot from the Home Guard was adapted by Ealing Studios, going on to be hailed a classic. It was released in the US as Tight Little Island and in France as the far more saucy Whisky A Go Go. The film details the story of the inhabitants of the isolated Scottish island of Todday, in the Outer Hebrides, where gloom sets in as their wartime rationing of whisky runs out. When cargo ship the SS Cabinet Minister runs aground the shrewd islanders run rings around the buffoonish English Home Guard commander Captain Waggett (beautifully played by Eddie Izzard) and conspire to hide away cases of the precious amber nectar. A terrific Scottish cast including Gregor Fisher as local postmaster (and narrator of the story) Macroon, Kevin Guthrie as mild-mannered teacher George; James Cosmo as local minister MacAlister, and a delightful script by Peter McDougal combine to make Gillies MacKinnon’s version a charming delight. [12A] Mark Adam.